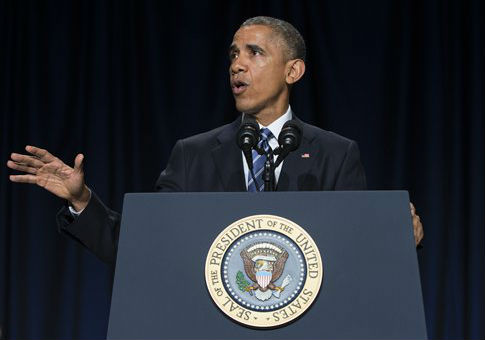 Human rights activists are assailing the Obama administration for the president’s appearance at the National Prayer Breakfast on Thursday with the foreign minister of Sudan, a country whose government is accused of genocide.

Activists also say the presence of the foreign minister, Ali Ahmed Karti, at the breakfast as well as reports of meetings with administration officials could signal that Washington is considering normalizing relations with Sudan. The International Criminal Court (ICC) indicted President Omar al-Bashir of Sudan in 2009 for war crimes and genocide in the southern region of Darfur, where the United Nations says government forces have killed as many as 300,000 people in non-Arab rebel tribes.

The National Prayer Breakfast is organized by the Fellowship Foundation on behalf of U.S. lawmakers, and is traditionally attended by the president. Sudanese and American activists promoted an online petition against Karti’s invitation and protested Thursday morning outside of the breakfast at the Washington Hilton.

Ibrahim Ghandour, a Sudanese presidential assistant, is also in Washington this week for meetings with State Department officials and the U.S. special envoy to Sudan, according to reports in the Sudanese media. An official in the State Department confirmed that Ghandour will meet with the administration next week. “He will meet with U.S. government officials,” the official said in an email. “The visit provides an opportunity to discuss a broad range of issues of concern to both parties.”

“Separately, the directors of the National Prayer breakfast invited Foreign Minister Karti to attend their event, taking place today. To our knowledge, he is not meeting with any administrative officials. All questions concerning Foreign Minister Karti’s participation should be directed to the organizers of this event.”

According to a participant in the protest outside the breakfast, the activists included Hawa Abdallah Mohammed Salih—a Darfuri who spent years in an internally displaced persons camp before she was forced to flee Sudan and government persecution in 2011. She received the U.S. Secretary of State’s International Women of Courage Award in 2012 in the presence of then-Secretary Hillary Clinton and First Lady Michelle Obama.

Karti is the former head of the Popular Defense Force, an organization of militias that has been accused of systematically killing the Nuba minority group in the 1990s in South Kordofan. He more recently pressured the U.N. Security Council to drop the ICC investigation of war crimes committed by Bashir. The court decided to postpone the Darfur investigation in December due to a lack of support from the Security Council, particularly China.

Violence continues to rage in Sudan. A recent Security Council report said that armed attacks by the government’s Rapid Support Forces “threatened to produce levels of violence, chaos, and confusion not seen in Darfur since 2004.”

Despite the ongoing violence and investigation by the ICC, Donald Booth, the U.S. special envoy to Sudan, has expressed a willingness to restart talks with Bashir’s regime.

“We must together chart a course forward,” Booth said in October. “To this end, I reiterate my readiness, and that of my government, to engage the Sudanese in a more frank and frequent exchange, to visit Khartoum, and to discuss the full range of issues that frame our bilateral relationship.”

The White House did not respond to a request for comment.

The Obama administration has come under withering criticism from some activists and lawmakers for their diplomatic outreach to other authoritarian governments in Cuba and Iran.

Daniel Wiser   Email | Full Bio | RSS
Daniel Wiser is a staff writer for the Washington Free Beacon. He graduated from UNC-Chapel Hill in May 2013, where he studied Journalism and Political Science and was the State & National Editor for The Daily Tar Heel. He hails from Waxhaw, N.C., and currently lives in Washington, D.C. His Twitter handle is @TheWiserChoice. His email address is wiser@freebeacon.com.